If you're a fan of the Little House books, you may have wondered about the ancestry of famed children's author Laura Ingalls Wilder. Although Laura has no living direct descendants, thousands of Americans share an ancestor or two with the ultimate pioneer girl.

Laura Ingalls Wilder was descended from some old New England families. You can see three generations of her ancestors in this printable family tree.

To open the printable, click on the image. Then you can save the document to your computer or print a hard copy. For help using printables, check out these handy tips. 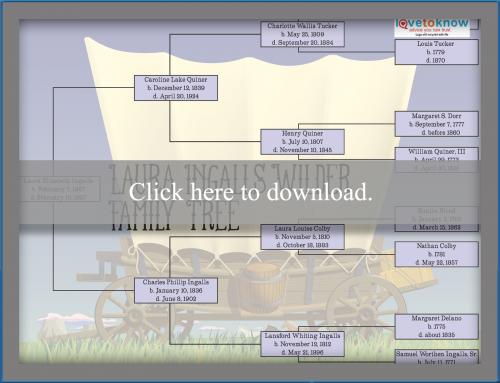 Family is one of the most important themes in the Wilder's books, and many readers feel an emotional connection with the characters in the stories. If your ancestors lived in America during the Colonial period, you may also share a genetic connection with Ma, Pa, Mary, Laura and the others. Many of Laura's ancestors arrived in the 17th and 18th centuries. Her eighth great-grandfather, Richard Warren, came over on the Mayflower.

Laura Elizabeth Ingalls was born February 7, 1867, near Pepin, WI. She traveled with her family throughout the Midwest, eventually settling in Mansfield, Missouri (MO). On August 25, 1885, she married Almanzo James Wilder in De Smet, South Dakota (SD). Laura wrote the Little House books during the 1930s and 1940s and died on February 10, 1957, at her home in Mansfield, MO.

Laura and Almanzo had a son who died in infancy, as described in The First Four Years, and a daughter, Rose Wilder Lane, who was born December 5, 1886, near De Smet, SD and died October 30, 1968, in Danbury, Connecticut (CT). Rose was instrumental in supporting her mother's writing efforts and had no surviving children.

Laura Ingalls Wilder immortalized her family in her series of children's books, which take place in the 1870s and 1880s. Laura's father, Charles Phillip Ingalls, who was known as "Pa" in the Little House books and was famous for the "wandering foot" that took his family all over the Midwest, was born January 10, 1836, in Cuba, New York (NY) and died June 8, 1902, in De Smet, SD. He married Caroline Lake Quinner on February 1, 1860. 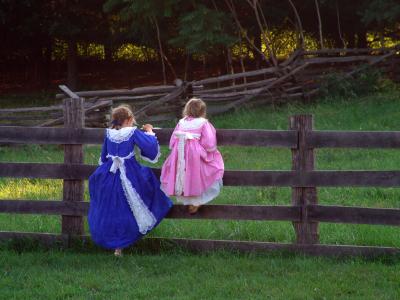 Besides Laura, Charles and Caroline had the following children:

The following individuals were the great-grandparents of Laura Ingalls Wilder:

To find out more information about the ancestors of Laura Ingalls Wilder and the story of the Ingalls family, purchase or borrow the following books:

To find out if you're related to Laura, trace your family's roots back to Colonial New England. Look for surnames in your tree that you have in common with the ancestors of Laura Ingalls Wilder. When you find a match, follow it back in both trees to find your common ancestor. You might just be part of this iconic American family!